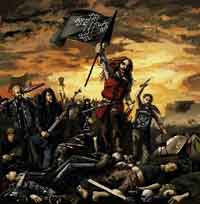 A German based band Bastard Nation, started its carrear in 2000 year. They work as a quartet formation, and till now released a 2 Demo issues, and also one Promo before the realization of actuelle full-length. Bastard Nation are on the field of heavy/power metal with clear epic and traditional metal elements. A strong influences comes out from the 80's period, and more from so call European then American school. "Birth Of A Nation" is a 10 track album, duration a little longer then 52 minutes, and I can say that band realistically has promoted own interesting spheres.

Historical and epic themes, and pretty coherent performings, characterize an album materials in general. One thing isn' t convinceble enough, and I think about productional work, which threathenings are little old-fashioned, and didn' t communicate with nowadays standards. But, other technical and releasing details funkcionized as well, and followers of mentioned genre's form could be quite satisfied at last. Finally, I would mention in my opinion titles of 2 favourable tracks - "Kill The Lion" and "Vinland".