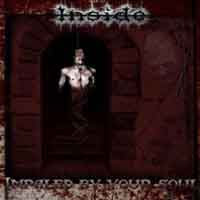 INSIDE "Impaled By Your Soul"
( Self - released ) 2007.
CD
Progressive death metal - ITALY

Italian band Inside was born from the fusion of 3 groups from the south of Italy, and its carrear continiously funkcionized from the 2001 year. Till now, band released 2 Demos, and in previous year still actuelle full-length "Impaled By Your Soul". Italians works as a quartet and musically are faithfull to one form of progressive death metal. A band has very tipical vocal line done by the frantic growling capabilities of singer and guitarist AGO. On the other hand all the members from band performs compactly, and I have to say that arrangments options are similiar from track to track.

The same opinion stay if we speak about productional work. A members from Inside delivers a lotta energy and enthusiasm, and there's no doubt that they did a lotta' effort in final realizations. Also, a professional technical details follows its musical message, and I have to mention an interesting packages of digi CD which they offered to audience. I can not find more elements of originality in group's approach, but its music didn' t dissapoint at last.

Labels: INSIDE - Impaled By Your Soul