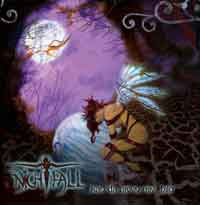 During the February this year a Belgrade act Nightfall release a full-length. Previously, they offered to audience a 2 Demos, and it's important to say that band is winner of "Zajecar 2007" fest. Musically, Nightfall performs in Serbia very often variant of heavy/power/progressive metal, they sing in own tongue, and in line-up has a well-trained musicians, where in my opinion a key attention belong to visually interesting frontman Marko-Maks Capljic. As a part of jury in mentioned festival, I had an oportunitty to face band alive few times, and I want to say that their basic qualities lays in atractive and convinceble stage performance. A little different view, I have after listening of band's album. A part of materials, group recorded in same repeatable manner, judging by arrangments realizations.It seems that band haven' t had enough breath to offer a same qualities of complete song materials in general.